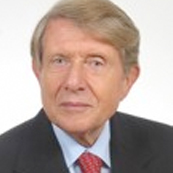 Dr Jerzy M. Nowak is a diplomat, who specializes in multilateral diplomacy (retired since November, 2007); a titular ambassador, has a PhD in Law. He had been in the external service since 1960, in several diplomatic venues: in Dar-es-Salaam (1962-65), Buenos Aires (1967-71) and New York (United Nation’s mission, 1981-86). An ambassador to the International Agency of the Nuclear Energy, United Nation Office and UNIDO in Wien (1992-97), in Spain and Principality of Andorra (2000-02) and North Atlantic Council (NATO) and Western European Union (WEU) in Brussels (2002-07). In the years 1973-2000, he was simultaneously engaged in KBWE prognosis and process, and then in the OBWE activity. In the Ministry of Foreign Affairs he was (among others), head of Studies and Programming Department, as well as Safety Policy Department (1997-2000), and at the same time a member of the team, negotiating Poland’s accession to NATO, the negotiator of the adapted Conventional Forces in European Treaty and a representative of the Head of the Polish branch of Organization for Security and Co-operation in Europe. He is an author of several publications in Poland and outside regarding European safety, control of armaments, Organization for Security and Co-operation in Europe, OSCE and United Nations. A participant of conferences and international seminars, he made speeches at countless international forums and universities. He is a member of a Polish Euro-Atlantic Society and American Eisenhower Fellowship, and before that a member of Directors’ Board of East-West Institute in New York and Polish Section of Roman Club. In 1960, he graduated from the Diplomatic and Consular Faculty at the Warsaw School of Foreign Service, and in 1967 he got a PhD at the Faculty of Law at the Nicolas Copernicus University in Toruń. He was honored with high Polish, Spanish, Lithuanian and Ukrainian distinctions. He is fluent in English, Spanish and Russian. He can also speak basic French. He was born in 1937 in Podole. He is married to Izabella Janowska-Nowak and has two children and two grand-children.