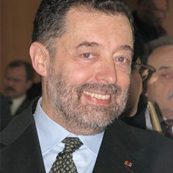 Prof. Kazimierz Wóycicki was born in 1949 in Warsaw. He graduated from the John Paul II Catholic University of Lublin – Faculty of Philosophy. He was a coworker of Tadeusz Mazowiecki at the ‘Więź(Bond)’ magazine (1974-1980). He was imprisoned during Martial Law in Poland. Between the years of 1985 and 1986, he studied political science at the University of Freiburg, as an Adenauer Foundation’s scholar. He was a journalist for BBC (1986-1987), had numerous connections with German democratic opposition in the 70’ and 80’. He was an editor in chief of the daily paper – ‘Warsaw’s life’ (1990-1993). Later on, he became the head of Polish Institute in Düsseldorf (1996-1999) and in Lipsko (2000-2004). He was the chair of Szczecin’s branch of National Memory Institute (2004-2008). Currently, he coordinates the program of 2009 anniversary celebrations and is an advisor to the Minster concerning the issues of veterans and victimized people. He is a lecturer at the University of Warsaw and a co-instigator of the ‘Copernicus Group’ – Polish-German discussion panel. He curated several exhibitions: Gates of Freedom (Berlin, Frankfurt, Lipsk, Wien), Expelled (European Parliament, Rennes), Golgota of East (Sejm RP, Białystok).

He received numerous prizes and distinctions: The Cross of Merit of the Federal Republic of Germany, Annual Prize of the University of Viadrina 2007.